We'd booked ourselves onto a bus from Bangkok to Aranya Prathet, where you can cross the border into Cambodia (country number three!)

We said goodbye to our guesthouse after filling up on fried eggs, toast and coffee to fortify us for the trip, and hailed a cab to the Ekamai bus station. Once there, after not too long a wait, we were ushered over to what was little more than a people carrier and squeezed in alongside about 10 other people and their baggage.

Once we'd fought our way through the Bangkok traffic and out of the city, things really got interesting. We seemed to have found ourselves in the care of a man who wasn't just willfully reckless in his driving, but appeared to have a full-on death wish. For all of us! 'White knuckle' just doesn't go far enough; he sped, weaved, braked, honked, zoomed, dodged, screeched and tore along the roads for two hours like a true maniac.

In many Southeast Asian countries, it's common to see spirit houses outside of homes and business and alongside roads. Apparently these are to house mischievous spirits that, if they didn't have anywhere to go, would be out causing chaos - like making people crash their cars or fall off of their bikes. Funny, I would've thought that drivers having a little knowledge of road safety, a modicum of patience and some general regard for the sanctity of human life would have its own protective effects. 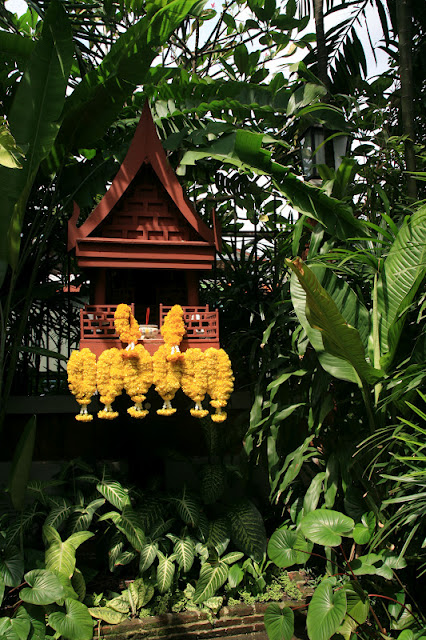 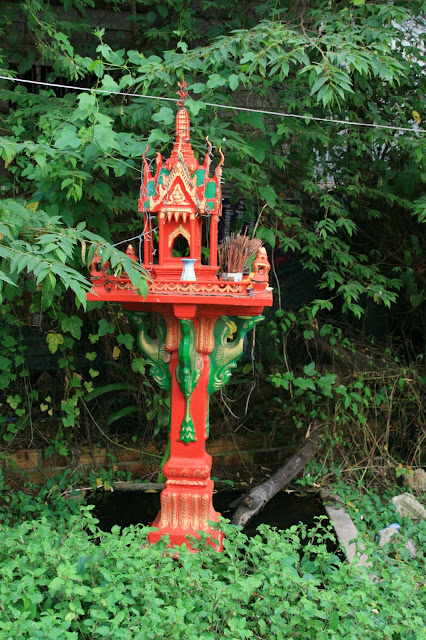 The spirit houses protecting us from calamity. PHEW!

The border crossing was one of those experiences that the Lonely Planet seemed to spin up into a stressful obstacle to be endured and powered through with one's head down. The book basically tells you to go straight to Cambodian immigration, not to speak to anyone as they're all scammers who work for local 'cartels' who'll harass you onto their buses and sting you for way more than a taxi driver would charge to get into town, and that you'll likely be charged extra exorbitant fees by officials for your Cambodian visa. Following our harrowing roadtrip to Aranya Prathet, I was feeling a little on-edge and the guidebook's warnings weren't helping any.

Luckily, Dave kept a very cool head and took the lead. Once we'd gotten through the Thai exit formalities, the first thing he did was to start talking to someone (!?) who ushered us over to a building where we were to purchase our visas, while I lagged behind generally panicking and cursing under my breath that it was all already going horribly wrong. We filled out our forms, only paid an extra 200TBH backhander on top of the official $20, and were then ushered on again by Dave's new best bud to the border crossing. By this point, paranoid me was convinced we'd been shafted and that whatever had been stuck into our passports resembling a Cambodian visa was actually some piece of expert forgery scrawled on the back of a napkin.

Standing slightly stressed in the short queue of tourists waiting to clear Cambodian immigration, I overheard two English lads behind us who'd taken the guidebook's warnings to the extreme; they'd indeed completely bypassed the visa office and headed straight to the crossing - just as I'd probably have done if I hadn't had a calm, sensible Dave with me.

Then it was our turn up to the counter, where they stamped our visas with a smile and digitally took our fingerprints. Then we were through! Into Cambodia! Without being arrested or laughed at or bankrupted! Sighs of relief from me. Sighs of mild irritation from Dave at my lack of faith. And yes, the the hapless guys behind us did have to go back to the office and buy their visas before trying again to enter the country!

So don't trust the Lonely Planet in this instance if it's whipping you up into a frenzy of apprehension about how tough the crossing will be; it's really not that bad.


Next step was to board the bus from Poipet (the Cambodian side of the border) to Siem Reap, where we'd be staying in order to spend the next few days taking in the ancient temples of Angkor Wat. New best bud had shadowed us through to the other side of immigration, and fair enough he did work for the 'cartel' on duty that day and did usher us onto their bus into town, but it only cost us $9 each and it was there and going in the right direction, and we were tired, and he was really nice, so hey, no harm done.

The bus journey took about an hour and a half and gave us a good opportunity to see a bit of our new destination speeding past the windows. The landscape was incredibly flat, with green fields stretching off as far as the eye could see. Alongside the road, water channels fed the crops and provided bathtime and recreation for the locals, with people swimming and even kids playing in rubber rings. Pale, saggy-necked cows and black bulls with huge horns plodded the water's edge, and white cranes frequently spread their huge wings to take flight over the scene. The roads were also dotted with more of SE Asia's ubiquitous roadside ‘shanty shops’ and the soon-to-be-very-familiar baguette carts. We shared the road with people cycling on rickety old bikes and whole families crammed onto scooters - dad up front, mum at the back, with at least three children of varying ages and usually a pet in between them.

We had a brief pit-stop at a roadside cafe for a much-needed can of the local Anchor lager. 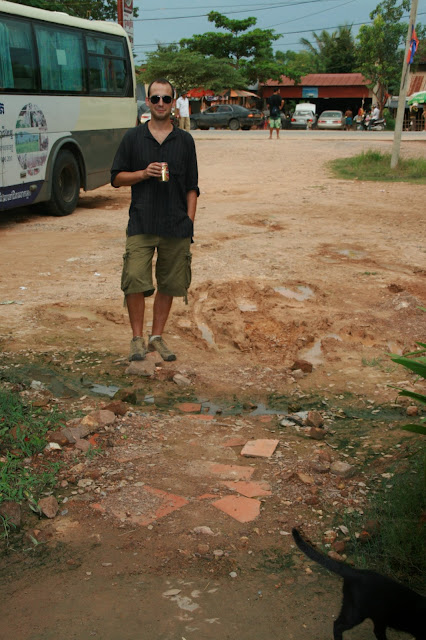 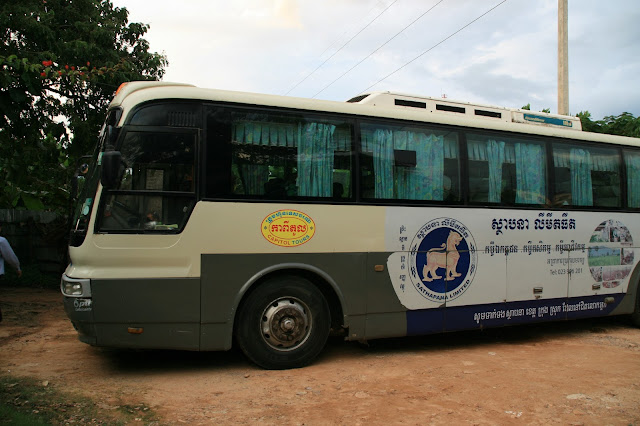 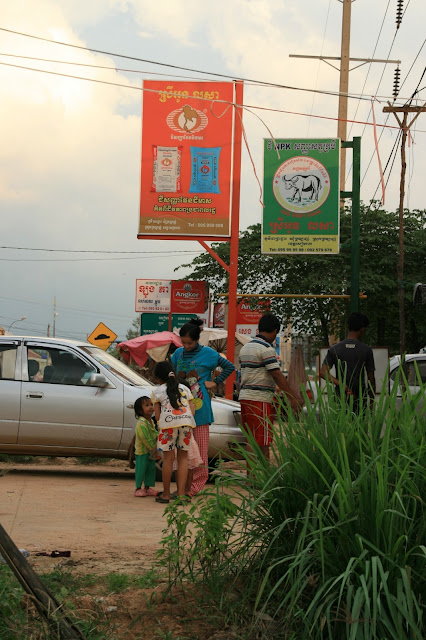 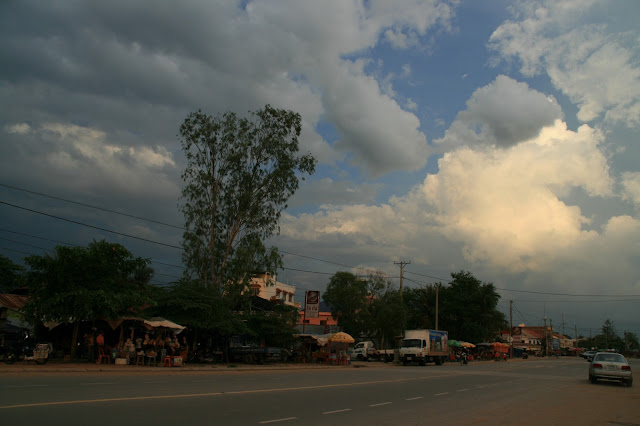 The roads got a little more nail-biting again as it began to rain and darkness fell (no streetlights!) but soon enough we arrived in Siem Reap and new best bud (let's call him by his real name - Lowk Barang) was ready for us in his other guise as rickshaw driver. So we got in - trying not to get too wet - and off we went to Garden Village, a guesthouse/hostel we'd found online, to find ourselves a room. The whole journey, from leaving Bangkok to getting to our accommodation in Cambodia, took about nine hours.

We got a large room with air conditioning and hot water for about £6.50 a night. They only had a twin available, so we pushed the beds together! The place also had a big rooftop bar and restaurant which served draught lager for 30p a glass and decent meals for about £1.50 a head. They also had a free pool table, free jukebox with great music and free WiFi. It was understandably full of backpackers!

We planned to take it very easy the next day, taking a wander around Siem Reap to get our bearings, and then the following day we'd start exploring the temples of Angkor Wat. But until then it was time to kick back, drink some cheap beer, fill our bellies, listen to some good tunes, and get a good night's sleep.
Posted by Bunny Darke at 03:58 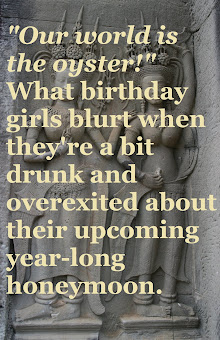 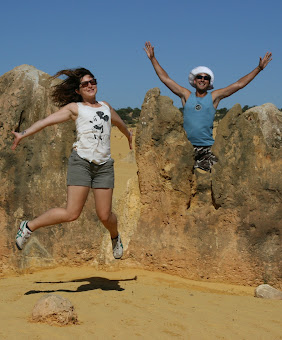 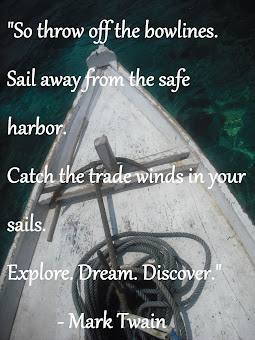 Another travel blog by some well-loved adventurers